Joey Logano, driver of the No. 22 Shell Pennzoil Ford Fusion, was a guest of the NFL’s Detroit Lions at OTA practice Tuesday morning, promoting the upcoming Quicken Loans 400 NASCAR Sprint Cup Series race at Michigan International Speedway. Logano met members of the team, showed off a Mustang pace car, and even played catch with Lions quarterback Matthew Stafford before taking time to talk racing, football and safety in each sport with media members. Below is a partial transcript.

JOEY LOGANO, No. 22 Shell Pennzoil Ford Fusion – “I always like to come see another professional sport and facility and how they train. This facility the Detroit Lions have is really impressive. The way people train and interact and all, you can take something and actually learn from that today and maybe even put it into our NASCAR program.”

WHO DO YOU ROOT FOR IN THE NFL? “I am going to make everyone mad but I root for the Patriots because I am from Connecticut. I have been up to their place, but working for Roger Penske you learn to root for Detroit quite a bit.”

WOULD YOU LIKE TO BE OUT THERE TODAY AND CATCH A COUPLE PASSES? “As long as nobody is running at me I am alright with that. I was standing out here a minute ago and watching the players go by and I felt really, really small compared to them. There are some really big dudes out there.”

HOW IS YOUR YEAR GOING? “So far we have come out of the gates really strong. Team Penske did a good job coming up with a good package with good speed and we have been able to use the new NASCAR package to our advantage. We did a good job in the offseason to make sure we came out strong at the beginning of the season and now everybody is starting to get hold of it and our advantage is going away. We have to keep working hard to maintain that advantage we held earlier in the season and make sure we are running the same pace we are now when the Chase starts.”

YOU ARE AT MIS IN A COUPLE OF WEEKS AND THE LAST TIME YOU WERE THERE YOU WON. DO YOU LIKE THAT TRACK? “I do. Anyplace you win you like but Michigan is cool because it is the fastest race track we go to. I can’t remember how fast the pole was last year but it was a track record of like 204 or 205 miles per hour, a really fast speed around that place. That part is really neat and it puts on a great race. This year, with the added drag to our cars, the draft is going to be huge, kind of like a truck race.”

ARE YOU CONFIDENT ABOUT A POSSIBLE CHAMPIONSHIP THIS YEAR? “It is the best shot I think I have ever had to win a championship. That is why we have to keep the momentum going. We were really mad last week about an eighth place and we need to keep that attitude. When you are happy for an eighth place finish that means things aren’t going well. We are fighting really hard and we still have speed in our cars. We qualified third there and that weekend was a tougher weekend for us. I felt like we were a fourth to eighth place car and that is where we finished. We have some improvements we need to make on our pit stops to get better there and we need to keep working on our speed and make sure we get the most out of our race cars each week.”

WHEN YOU SEE A FOOTBALL COLLISION HOW DO YOU EQUATE IT TO WHAT YOU GUYS GO THROUGH? “I am glad I am in a race car is what I say. These guys get hit a lot harder than a race car does. We take some big hits in cars but the safety in our sport has improved a lot, not just with the COT car, but the seats, helmets, belts, all of that stuff keeps improving. Not that it doesn’t in football, I think it does there too, but we take a hit maybe once every 15 races or so on average and these guys are taking hits on every play. I feel like my sport is a lot safer. We may look crazy going 200 miles per hour but I would much rather hit the wall at 200 than have a 300 pound linebacker coming at me.”

YOU HAVE HAD A CONCUSSION HAVEN’T YOU? “Obviously you get hit enough that you get a little spun out, but that is just part of the sport.”

DO YOU HAVE TIME FOR ANYTHING TO GO THROUGH YOUR MIND WHEN YOU ARE IN A WRECK AND TUMBLING LIKE THAT? “You never stop driving. Even though you may be out of control, you are trying to regain control, get control back to get it rolling again. You are in damage control once the crash starts and save what you have.”

DO YOU RELAX ON A SUNDAY OR MONDAY AND WATCH THE NFL? “Monday Night Football are the games that I watch. I don’t really have time at the race track, I am in race mode. And I doubt many football guys are watching races on Sunday before their games because you are in the mode, in the zone. Sunday night I get home and I want to re-watch the race we just had and get my notes done while everything is fresh and maybe learn something while my wheels are still spinning about it. Monday nights are my night off and then you get back in the zone for the next week.”

HOW HAS IT BEEN WITH FORD. THEY LOOK STRONG THIS YEAR. ARE YOU HAPPY WITH WHAT YOU’VE GOT? “Yeah, of course. Ford has been a great partner of Team Penske and this is our second year with them and last year it was a little of a learning curve of trying to understand their ways and the way Ford does things but that is a learning curve you will have no matter where you go. Now I think we are all on the same page and able to improve on what we have and are working very closely together, not just with Ford but with other Ford teams out there and we are able to improve all of the Ford’s out there on the race track. We are working on that and it is a never ending thing to keep getting better and that is what we have to do because the competition doesn’t get any easier. It is the same in football right? It is getting tougher every year to go out there and win.”

YOU MENTIONED YOU FEEL SAFER IN YOUR SPORT. THAT MAY SEEM WEIRD TO PEOPLE. WHY DO YOU FEEL THAT WAY? “Why do I think it is safer? I have a lot more stuff around me. And the amount of hits you take. Our hits may be pretty brutal but at the same time we have done a lot to our race cars to make them safer. It is the seats, and more. It never changes and NASCAR has a constant program of always being able to move up and test cars and crash cars and try to figure out what we can do to make them safer and make the crush zones crush and if there are parts that need to be stiffer they make them stiff. I don’t think there are as many areas in football to improve on. Obviously you have pads and helmets but you are still going to get hit every time, there are still going to be big guys hitting you and obviously when you get all the adrenaline going those hits don’t become softer. Those guys are big. I think that is a big difference but we are kind of comparing apples to oranges.”

IS THERE ANYTHING APART FROM THE HELMETS THAT THE NFL COULD TAKE FROM NASCAR IN TERMS OF SAFETY? “I am sure some of it can, yeah. Pads we don’t have much to do with there. We have some certain foams in our seats and headrests and there is a lot of technology in our helmets that may be able to transfer over. It is the same thing, we are looking for the safest helmet at the lightest weight and that is the same thing here I am sure. I am sure helmet companies have gone out and looked at all that stuff.”

WHAT ABOUT IN TERMS OF THE NECK OR THE BACK AREA? “We have the Hans Device which requires a seat belt to make it work. I don’t know how the heck you make one work in a football scenario. I am probably not the guy to ask on that. Safety always needs to be improved in everything we do, whether it is a street car or race car or football. Whatever it is, it is something that should always be improving.”

DO YOU THINK YOU WOULD FEEL DIFFERENTLY ABOUT RACING IF YOU WERE IN A PREVIOUS ERA? “Yeah, our sport was very dangerous back in the day. All motorsports were. Drag racing, IndyCar racing, NASCAR obviously were all very dangerous. You think about where our sport came from; our sport came from the stock car, the cars at the dealership with the bench seat and a lap belt and they just let it rip. That is crazy. They took a lot more risks and a lot of people got hurt and people got killed and to see where we are now, with the cars going twice the speed, I feel like four times safer, that is a big deal. We have made huge improvements.”

IF YOU TRANSLATED YOUR TALENTS ONTO THE FOOTBALL FIELD, WHERE DO YOU THINK YOU WOULD LINE UP? “I wouldn’t even make the team, I guarantee you that. I wouldn’t be good at any position. They tried to teach me how to kick a field goal when I visited the Patriots and it went really bad. If they try to teach me here, it will go really bad again. I don’t really know where I would fit in. Probably on the bench somewhere.” 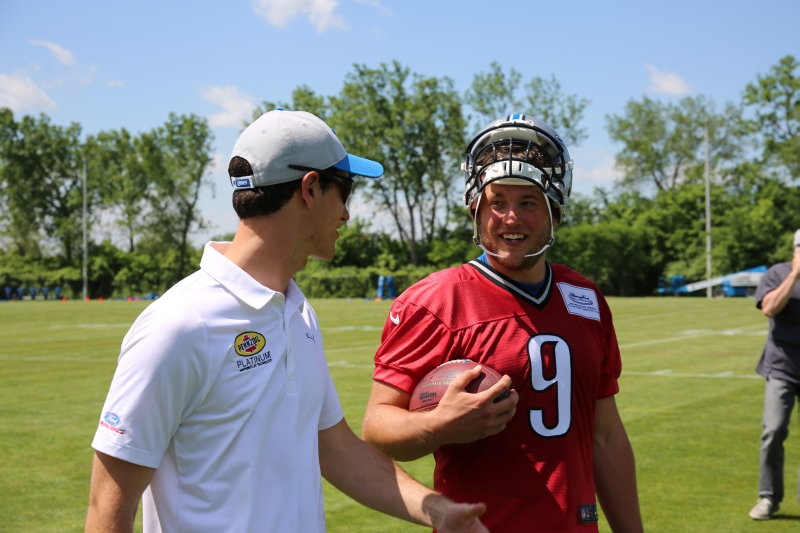 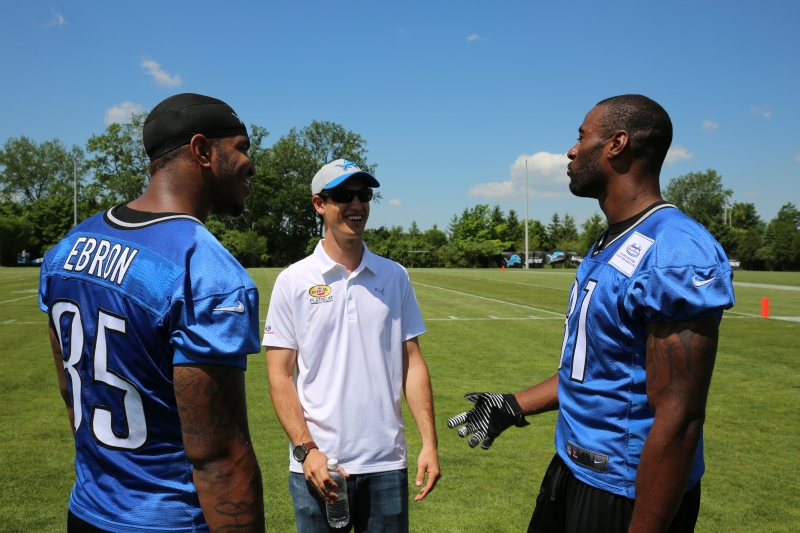 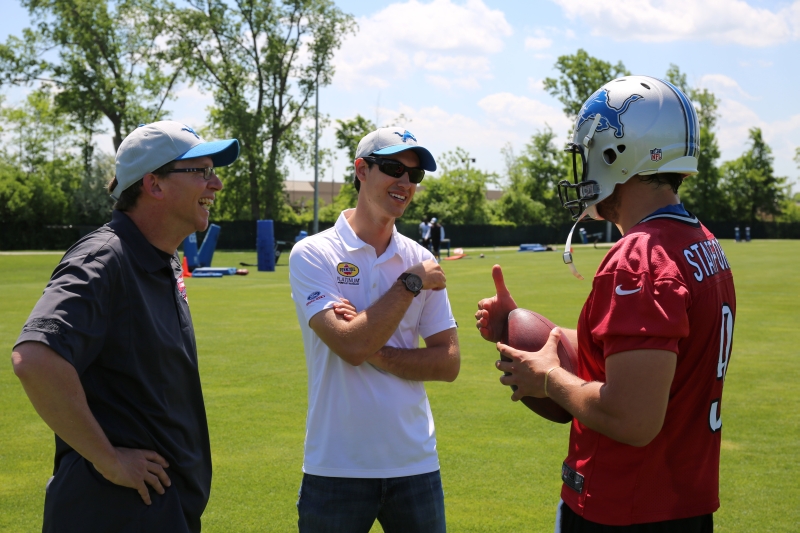 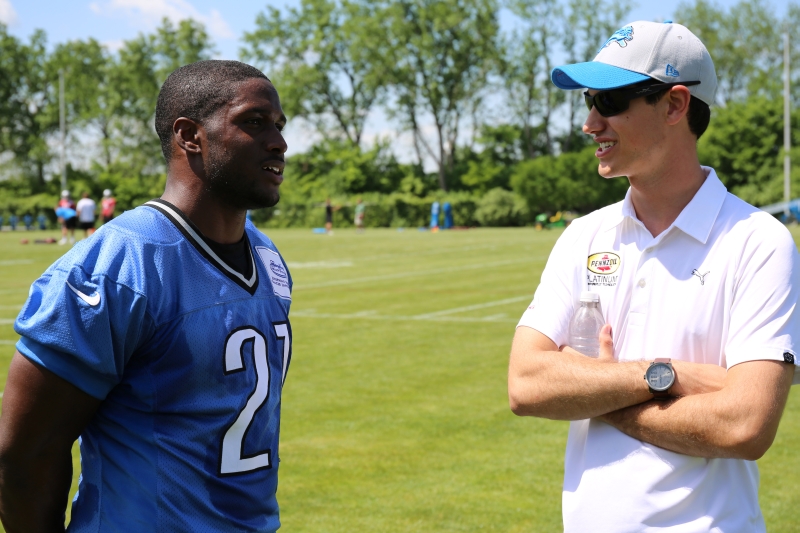 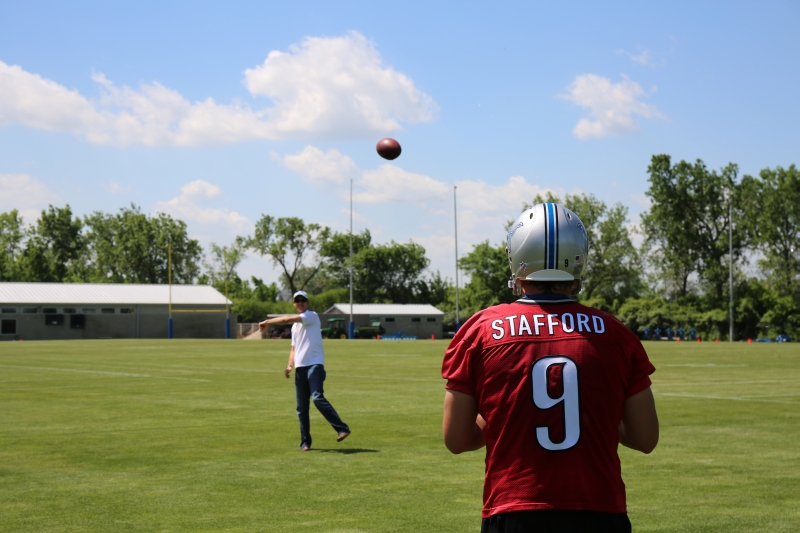 About the Author: Jean Costa